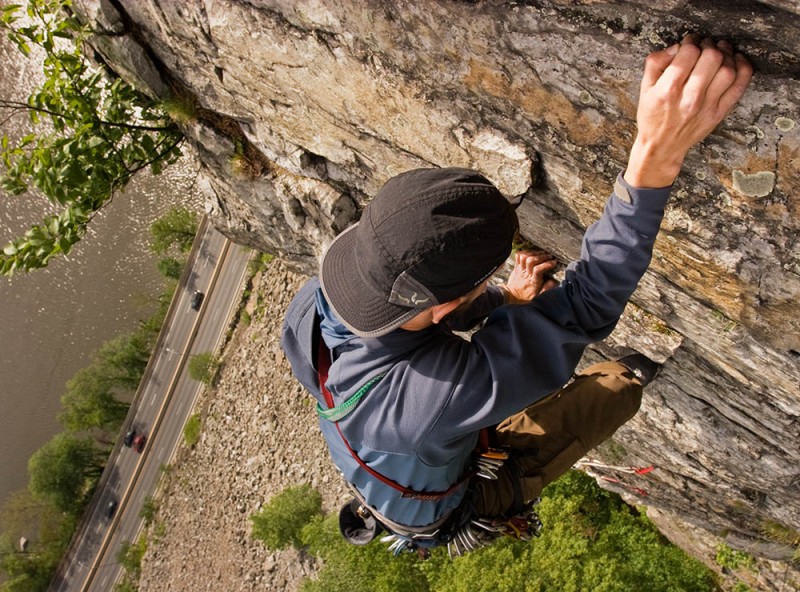 Treacherous cliffs are a metaphor for my parenting.  My kids want to dangle from them. I stand at the base wringing my hands, even now that my kids are grown. If you’re that danger-averse parent, listen and learn.

When our children were young we took them to Devils Tower in Wyoming and I was barely out of the car before they were scrambling all over the rocks trying to conquer the summit. On those occasions I would shout, “Let’s all go to the gift shop!”

Our favorite hike when we lived in Maryland was the Billy Goat Trail along the C&O Canal — a sometimes ramble with occasional “shortcuts” over sheer rocks. On one memorable day the children, as usual, had sprinted ahead of us and out of sight. Up ahead we heard the tremulous voice of our oldest son James, then about 12. “Dad? Help.”

Paul and I rounded a corner to see James clinging to a rock about halfway up the climbing face. He couldn’t see his way up or down. My mind raced through possible rescues: call a helicopter or a mountain rescue squad; string a hammock below him to catch his fall; talk him through one of those trust exercises where he lets go and we promise to catch him.

But Paul, without showing any signs of concern, walked to a vantage point where he could see the whole rock face. “No problem. You can do this easy,” he said, and then he talked James through a series of handholds and foot placements until he reached the top. James had not been rescued (my solution), he had conquered the cliff and earned a fist pump.

A few years later I found myself standing at the base of Sheepeater Cliffs in Yellowstone National Park watching my youngest son Will, then about 8, scale the basalt columns that, from my vantage point, looked dangerously sheer. “Get down here right now!” I shouted.  But Paul called out to him, “No problem. You can do this.”  And he did.  (Will calls this little victory the “Sheepeaters incident,” which is not to be confused with the “sheep head incident” when I also lost my cool upon finding a sheep carcass under our picnic table on a lonely stretch of Nevada desert highway. I believe my words then were, “We’re all going to die out here!”)

Suffice it to say, my first preference in any situation is safety, followed by predictable outcomes where no one gets dirty. In that I think I am like most mothers. It’s the reason why you don’t as many women at Boy Scout camp. They don’t tell us much about what happens there. We suspect a lot of belching, flatulence, junk food, open flames and knives. Everyone comes home with scrapes and bruises, smelling of a week without a shower and supremely happy. It’s “man world” where chaos reigns.

Before you accuse me of gender bias and force me to trot out my ample feminist credentials, let’s get real. Women are the primary nurturers of children in all cultures. We build them in our wombs and feed them from our breasts and after all that we aren’t about to let anything hurt them. Unfortunately our definition of “hurt” can be too broad. It encompasses the professor who gives them a “C,”  the boss who doesn’t see their value, the roommate who eats their leftovers.

Mothers cast themselves in the role of cautious protectors, because, heaven knows, fathers won’t do it. Many fathers, and even mothers, call it “babysitting” when Dads are left in charge of the kids. Men may have learned from painful experience that if they try to change a couple’s parenting style or practice, they are rebuffed. This is not their territory and they will be perceived as meddling amateurs. Or maybe it’s just that men find it safer to step out of the space between a mother and her cubs. (It’s something they learned at Boy Scout camp.)

Too many mothers don’t give fathers time and space to be equal parents. This is true not only in the diaper stage, but in the adult-child years, too. Think about the pattern in your marriage when your adult child calls home with a problem. If daughter asks for Dad, does Mom hover nearby, ready with the third degree and a boatload of advice? If Mom takes the call, does she ever say, “This sounds like something you should talk to your Dad about?” If you are a divorced mother, can you picture yourself saying to your adult child, “Have you thought about asking your Dad for advice?”

Moms, take a deep breath. Now, examine the level of trust you have cultivated over the years for the father of your children. Whether because of a broken relationship, or simply a pattern of taking over and giving men a pass in parenting, that trust has dwindled. You may be unconsciously depriving your children of a male style of parenting that they need, even in their adult years. And you’re depriving yourself of a partner in coping with your adult child.

An 80-something friend recently shared with me some concerns about her adult children and what she sees as their destructive choices. She wants her husband to “care” as much as she does. Armed with solutions, she confronted him. “Aren’t you worried about them? Shouldn’t we act now?” Her husband (think deer in the headlights) responded haltingly that he hadn’t really given it much thought. Of course he hadn’t. As was typical of their generation, they had spent their child-rearing years with him in the workforce and her making the parenting decisions. Now she’s changing the rules. It’s like handing a man a diaper for the first time and telling him it’s his turn. There’s going to be some leakage.

Ignoring the strength and skills of fathers is a mistake that I have made over and over again. Paul had to tell me to butt out of Will’s Eagle Scout project when I tried to get between the two of them in that “man world.” That was a fairly painless rebuff compared to the terrible moment in I-Hop. We were visiting Will in his college town and learning the surprising details of how our bright boy was failing all his classes (except bowling.) Paul wanted to listen. I wanted to fix. As my outrage and disappointment ramped up, Will visibly shrank into his chair. Paul could take it no more and silenced me. I retreated to the car and cried, knowing he was right.

Years earlier when James, at the height of his teen rebellion, was in a heated discussion with Paul in the kitchen. I stepped up and added my two cents’ worth. James turned on me: “Who asked you?” It was a legitimate question. No one had asked me. I had jumped into the middle of a father-son moment, lacking trust in my husband to parent.

Don’t rescue your adult children from danger. Don’t stand between them and failure. Don’t take away their opportunity to figure it out. Don’t expect immediate results. Give your suggestions time to percolate. Don’t butt in if you’re not asked.  Trust their father to help you, and expect his style to be different from yours. It’s never too late to ask Dad. If you haven’t trusted him before, give him some time for a learning curve and expect a little leakage.