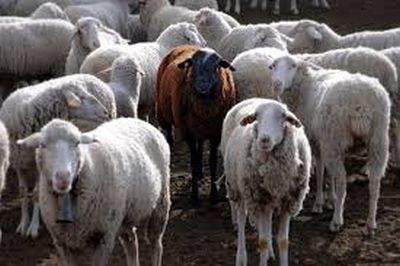 Sheep get no respect. Nobody wants a child to turn out to be the “lost sheep” or the “black sheep.” It’s time to take a broader look at these misunderstood mammals, and at your adult children who fit the description. You may have been wrong about both.

Jesus’s Parable of the Lost Sheep is one of the shorter of his stories. The gist of it is: What man of you, having an hundred sheep, if he lose one of them, doth not leave the ninety and nine in the wilderness, and go after that which is lost, until he find it? (From Luke 15)

I’ve always interpreted it to be a story about rescuing the wayward and rebellious. Then I went to Israel and my eyes were opened. The hillsides of Israel are dotted with sheep, always under the watchful care of a boy or man shepherd. I wondered how a sheep could possibly get lost in that setting. Sheep are herd animals; they don’t want to be lost. But occasionally they put their heads down to graze and soon wander unwittingly away from the herd.

Our tour bus took us through some of the most barren landscape on earth, the Judean Wilderness, and we were astounded to find sheep herds even there. As we passed a herd in the distance, one of our group shouted, “Look, a lost sheep!” The herd was on the move led by the shepherd, and about 100 yards behind the main group was a solitary sheep. It was moving at about half speed, hampered by a limp, but trying its best to catch up with the herd. I had an epiphany. This little guy was not lost, just slower than his peers – “special needs” in the sheep world.  And from what I had learned about shepherds on that tour, I was pretty sure this shepherd knew exactly where his straggler was and how long it might take him to cover the same distance as the “normal” sheep.

Picture your “lost sheep.” Perhaps one day they put their heads down in search of tempting grass, and wandered off. Your son didn’t plan to get addicted to drugs. Your daughter didn’t expect to get pregnant. Your son didn’t want to fail at every job he tried. Your daughter didn’t set out to break your heart. They wandered from your values and expectations, searching for something more alluring and went places they never expected to go. When they finally looked up from their new life, the distance between old and new had grown so large as to seem insurmountable for them and for you. They may seem lost to you, but remember that straggler sheep trying his best to catch up.

Outwardly your adult child may look sullen and unchanged, but inwardly he or she could be struggling to fix what they know has been broken and close the distance between them and you. Look for the subtle signs. They remember to call you on Mothers’ Day or Fathers’ Day. They ask for your help with the grandchildren. They show up with a load of laundry and spend the afternoon. They seek your advice on a small matter. They say, “Thanks.” Like that shepherd in the Judean Wilderness, your job is to keep your eye on where they are and recognize when they are trying. Sometimes that’s all you can do.

And as for those “black sheep,” that’s another misunderstood metaphor. Most sheep with black faces produce prized white wool. Some breeds of sheep are born totally black and then whiten as they mature. The look of a lamb is no guarantee of the outcome of the sheep. At best, the “black sheep” label is temporary or partial. Similarly, your black sheep is a work in progress, and may just have an independent streak that allows him or her to distinguish themselves from the crowd. That’s not always a bad thing.

One final lesson from the Bible — this one about goats. The word “scapegoat” comes from an ancient Hebrew practice on the Day of Atonement. A priest would confess all of the sins of the people over a goat, and then the goat would be driven into the wilderness, ideally carrying those sins with him. It was a symbol of a Messiah’s power to absolve sins. It is not, however, an excuse to blame the goat. Take care not to “scapegoat” your wayward young adult for your family stress or your marital discord or your imperfect life. They already have enough burdens to bear.