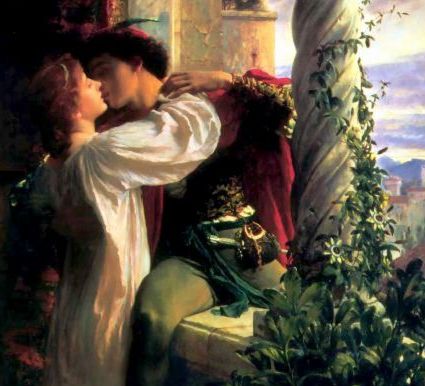 Romeo and Juliet is more than a Shakespearean tragedy about teen lovers trying to break free of their oppressive parents. It is a phenomenon recognized by some social scientists as “the Romeo and Juliet effect:” Johnny and Jane fall in “love;” their parents say, “over my dead body;” and puppy love that might have faded becomes passion. Young lovers bent on proving their parents wrong cast themselves in a romantic drama that hurtles toward the altar. What is the father of the bride or the mother of the groom to do when a child seems hell bent on marrying badly?

Back off a bit, is the advice from a group of researchers at the University of Colorado who studied the effect of parental interference on their children’s affairs of the heart. (“Parental Interference and Romantic Love: The Romeo and Juliet Effect,” Journal of Personality and Social Psychology, Vol 24, 1972.) Apparently, the more parents object, the more intense the love connection becomes. But when parents bite their tongues, young love is more likely to run its course and fade. The original Romeo and Juliet research has been called a statistical fluke by some subsequent researchers who factored in the contemporary phenomena of expanding social networks and the influence of friends’ approval and disapproval. But those newer studies still find that parental disapproval can later sabotage the marriage they tried to stop. It’s hard to escape the conclusion that “back off” is still the best advice for parents.

There are subtle societal forces at work on your marriageable young adult. The good news is, their generation is putting off marriage to a later average age, in large part because they see it as something to do after school and career launch, not before. But they also are more aware of the fluidity of marriage – easily entered into and easily discarded. If your adult children make it to their mid-20s without tying the knot, their brains will be more developed, along with their ability to make rational choices. If their marriage choices are made earlier when they are naturally pushing away from parental control, what Mom and Dad don’t want looks mighty appealing.

It was in those betwixt and between years where the Montagues and the Capulets went wrong. Had they told Romeo and Juliet to have a nice time and be home by curfew, the shine might have faded from forbidden love. The lovers might have gone off to different colleges, postponed marriage for a few years and lived happily ever after with someone else.

Which is not to say that parents should abdicate when a young adult is on the bumpy road to a bad marriage.  The authors of the Colorado study advise a deft approach using gentle persuasion instead of punishment.

The choice of a child’s marriage partner is ultimately their own in most cultures, but a careful parent can still have an influence. First, make an honest assessment of what bothers you. It must be more than simply, “That’s not the person I wanted you to marry.”  Legitimate concerns include:

Respect your child’s independence, but carefully craft some discussion openers. These are attempts to get your child to think about the consequences of their choice and trust you as an ally in that process. You are not there to impose advice. These are not “gotcha” questions:

Take your cues from your adult child. If they don’t want to talk, then smile and tell them you will be available when they need you. Don’t burn your bridges by criticizing a fiancé who may someday be a member of the family. Find something nice to say about Jane or Johnny. Welcome them into your family circle often during the courtship and use those gatherings to model good family and spouse relationships. With any luck your child will notice if their beloved is out of sync with what they have been raised to expect in a healthy marriage.

If your gentle persuasion fails and your impulsive child heads to the altar, keep an open mind and an open door. And remember that Shakespeare himself was a believer in blind love and short courtships. His advice in Sonnet 116 will be the last word: “Let me not to the marriage of true minds admit impediments.”