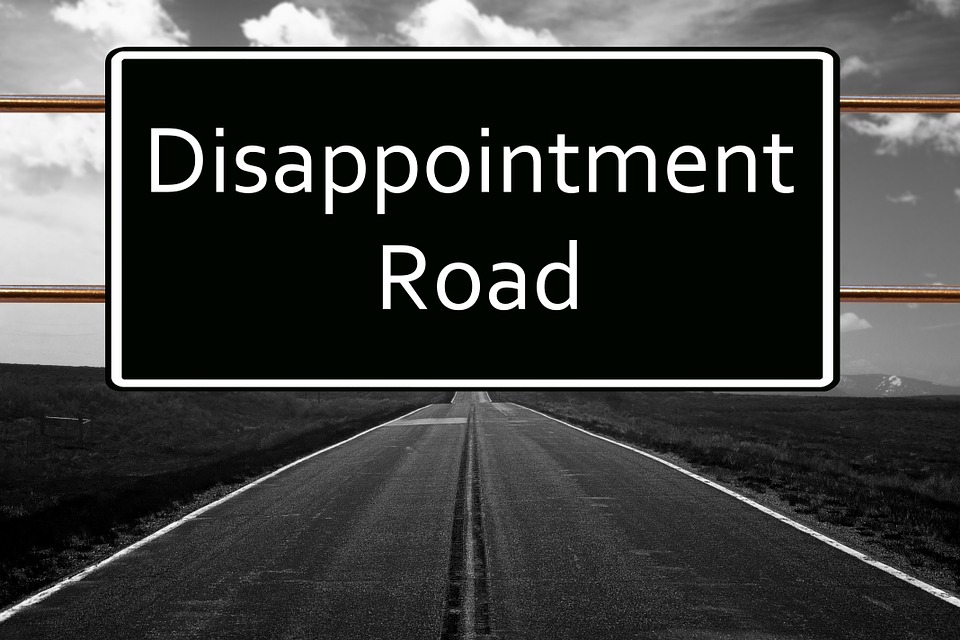 Disappointment is a powerful weapon in a parent’s arsenal. It’s not the same as anger, frustration or fear. Disappointment says “I know better than you.”  It says, “You didn’t do it my way and therefore you did it the wrong way.” Disappointment from a parent is the nuclear option.

I cannot remember a single time when my parents expressed genuine disappointment with me.  There was plenty of frustration and anger, like the summer I spent in my bedroom reading Gone With The Wind and sobbing. My mother finally tore the book from my hands and threatened to burn it if I didn’t come out of my room and get a life.

This is not to say that I didn’t disappoint my parents from time to time. It is to say that they never let it show. Would that I had learned from their example. As a mother of adult children, my ego has been too often wrapped up in their successes and failures. I have burdened them with my expectations and barely masked my crushing disappointment when they didn’t follow my plan.

Once while preparing for a visit from one of my perceived under achievers, I turned to God for guidance. After a short prayer, I opened my New Testament randomly to Paul’s second letter to the Christians at Corinth. “…I determined this with myself,  that I would not come again to you in heaviness. For if I make you sorry, who is he then that maketh me glad, but the same which is made sorry by me?” (2nd Corinthians 2:1-2)

It slapped me upside the head. I had been expecting my children to make me glad, when I came to them with nothing but heaviness.
“All A’s except one B? What happened?”
“Is that girlfriend the best you can do?”
“You quit your job again?”
“Your apartment is a disaster!”
“You missed the application deadline.”
“The grandchildren didn’t call on my birthday.”
“I was hoping you would make a different choice.”

I’m not advocating a Pollyanna approach. For those of you born after the baby boom, “Pollyanna”was a book and then a movie about an annoyingly chipper little girl. And then it became an epithet. The Merriam-Webster dictionary defines “pollyanna” as an adjective: “a person characterized by irrepressible optimism and a tendency to find good in everything.” And as you might imagine in our jaded 21st Century, it isn’t a compliment.

A Pollyanna mother would beam at her incarcerated son through bullet proof glass and tell him how proud she was that he had earned a roof over his head and three squares a day for the next 25 to life. Someone short of Pollyanna, however, would put on her best face and tell her son that she still believed in him and his ability to make something positive out of any circumstance.

This “best face” is practiced in private, after painful recognition that very little in life will go the way you expected it to go. In the sage words of Jenkin Lloyd Jones: “Anyone who imagines that bliss is normal is going to waste a lot of time running around shouting that he’s been robbed. The fact is that most putts don’t drop, most beef is tough, most children grow up to just be people, most successful marriages require a high degree of mutual toleration, most jobs are more often dull than otherwise. Life is like an old time rail journey…delays…sidetracks, smoke, dust, cinders and jolts, interspersed only occasionally by beautiful vistas and thrilling burst of speed. The trick is to thank the Lord for letting you have the ride.”

Fortunate is the child who has a parent with a gift for enjoying the ride.
But our disappointment is real and something that must be managed lest we poison our relationships with our adult children and undermine their confidence.

Four scholars specializing in human development and family studies at three universities studied the phenomenon of parental disappointment. The four, Kelly Cichy, Eva Lefkowitz, Eden Davis and Karen Fingerman, published their findings in a report they called “‘You are Such a Disappointment!’: Negative Emotions and Parents’ Perceptions of Adult Children’s Lack of Success.” They found that when parents like you perceive their children are not living up to expectations, their emotions can include disappointment, anger, guilt and worry. That is an unholy quartet guaranteed to make parents miserable and children frustrated.

Here are some of the study findings that may ring true for you:
• Parents may interpret their child’s failure as their own failure.
• Parents may worry that an unsuccessful child may be a burden in the future when the child needs to be helping the aging parent.
• Parents may have different goals and expectations for their sons than for their daughters and may put different energies and resources into them when they are at risk.
• Fathers are more likely to react with anger when a child is perceived to be failing in a career, especially if family money was wasted.
• Mothers are more likely than fathers to take responsibility for a child’s failure in relationships, particularly a daughter.
• Adult children who pick up on their parents’ disappointment can respond in one of two ways. The one you hope for is that they kick into gear and make something of themselves. (Good luck with that.) They could instead adopt your negative emotions about themselves.

There is a ray of hope in the research. If your child is a young adult, your disappointment may be temporary. They are still works in progress and you may yet look back on this time of worry and wonder what all the fuss was about.

Let me say something in defense of worriers. It’s a dirty job but someone has to do it. My husband likes to remind me that pessimists are never disappointed. I counter that optimists are never prepared. I specialize in preparing for the worst. I like to see myself in the words of Debbie Reynolds in the old movie “Mary, Mary:” “Some people have such a talent for making the best of a bad situation that they go around collecting bad situations so they can make the best of them.”

If you are such a personality — a collector of bad situations — your adult children will fare better if you keep that collection to yourself. Try approaching them with more optimism and confidence in their adulthood. You need not endorse their failures. You only need to help the adult child take ownership of those failures and learn from them. It is likely they are already disappointed enough in themselves and may have been harshly judged by friends, employers, teachers and even strangers. Don’t pile on.

You were the Mom or Dad who taught them how to walk and ride a bicycle. When they fell you didn’t berate them; you picked them up and cheered them on. You walked and ran beside them until they could do it on their own. You can still be that parent. If you hope for them as adults to be an ongoing source of joy for you, don’t “come to them in heaviness.”